♦ ALAMBRE 20 YEARS THE BEST FORTIFIED WINE OF THE YEAR ♦ 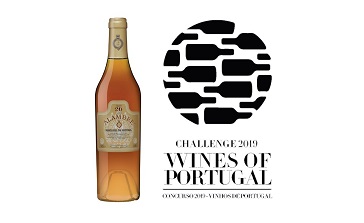 The Alambre 20 Years old from José Maria da Fonseca was distinguished with the award of best fortified wine of 2019, at the annual award gala of Wines of Portugal Challenge, organized by ViniPortugal. The ceremony took place last Friday at the Cruise Terminal of Leixões in Matosinhos.

This fortified wine is produced with the Moscatel de Setúbal grape variety, which is best known by its fruity aroma and honey character. This wine is a blend of 6 different vintages, where the youngest is at least 20 Years Old and the oldest is 1911, resulting in a very aromatic wine, full of complexity, elegant and with a very long finish.

This recognition reinforces our mission to continue to produce Moscatel de Setúbal wines, with the highest standard of quality and excellence.

Part of the annual production of Moscatel de Setúbal wines is kept in storage for a longer period in used oak casks, to serve as the basis of these older wines. These old cellars can be visited in our Museum House in Azeitão.

The wines awarded, were initially selected in a blind tasting, by an international panel and later on confirmed by the Grand Jury of the competition, which consisted of Dirceu Vianna Junior, based in the UK, Evan Goldstein from the US, Thomas Vaterlaus from Switzerland and Bento Amaral and Luís Lopes from Portugal.