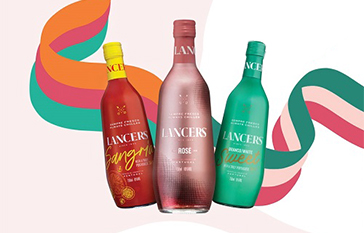 Lancers family has grown! Lancers Sangria and Sweet are the two new wines that will cheer up your summer.

“This year we launched two new wines under the Lancers brand – Lancers Sweet and Lancers Sangria, with the objective of building on the success of this iconic brand. These two new wines reflect the core values of the Lancers brand, given their originality, authenticity and the power of uniting people in moments of friendship and enjoyment. Everyone will want to try these new wines for the summer” says António Soares Franco, Board Member of José Maria da Fonseca, responsible for Marketing and Sales.

The Lancers Sangria has a Portuguese twist. It is very fresh, crisp, with aromas of lemon, orange and strawberry and a final taste of cinnamon. The preparation? It couldn’t be easier. Mix some ice, lemon peel and an orange slice and it’s ready!

Lancers Sweet is the new white wine in the family. It is sweeter, with banana aroma, mango and orange flower, very fresh and it will make your moments even Sweeter!

This red wine originating from the Setúbal Península, stands out as “one of the finest creations from Domingos Soares Franco”, according to the wine magazine in its annual Gala. This Hexagon 2015 was considered the best Hexagon to date, after 8 different vintages. The first Hexagon was the 2000 vintage, and was the result of a challenge presented to Domingos Soares Franco to make a world-class wine from the Setúbal Península.

For the launch campaign, José Maria da Fonseca challenged the agency 9 communication, who have worked together with illustrator Antonia Figueiredo in the creative concept. AF Illustrations has a colourful and fun mood board, which represents perfectly what Lancers is all about. Created in June 2018, AF Illustrations has collaborated with Magnum ice creams, Kryolan makeup and fashion brand Chiara Ferragni Collection. Its talented GIFs have had more than 490 million views. This campaign will include influencer activity, a digital media campaign during summer and a heavy point-of-sale presence.